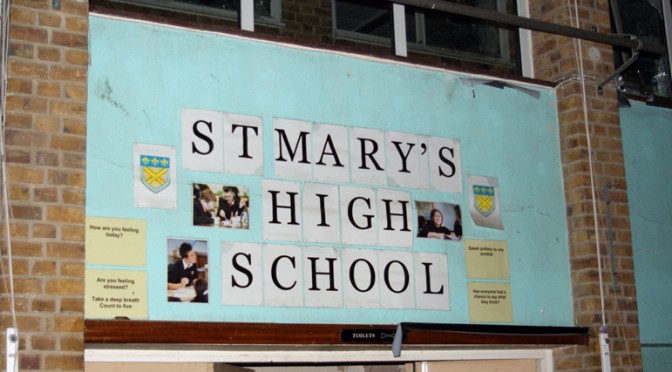 Knowing about this site for a good few years now but totally slipping my mind, we finally got the opportunity to explore this place and with some new faces too. A first night time explore for myself so my pictures are pretty pants, but you win some and you loose some and a great explore none-the-less.

After almost rethinking our plans for the night after spotting security sitting at the main entrance, we found another route in and managed to somehow evade them throughout the entire explore.

The building itself is under development and has been well and truly gutted in most areas, leaving only a few old class rooms, the main hall and stage and the sports gym.

As always in true UrbexDevil fashion, here’s some very brief history on the place that’s un-regretably pinched from wikipedia. 😛

St Mary’s High School was previously located next to the Church of St Mary the Virgin in Cheshunt, but moved to a new site in the town in April 2010. The school converted to academy status in August 2012.

Excuse the poor pictures, a mixture from both my phone and the camera on my first night explore, but I am sure it is the last many will see of the old school.